Alastar is not a legendary lord, but rather a unique lord recruitable by playable High Elves factions in campaign. He costs 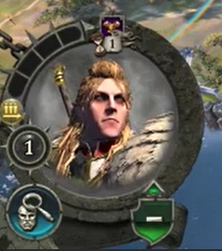 Alastar was designed by someone named Alistair, as part of a project by the Make A Wish charity. Make a Wish "grants wishes" for seriously ill people (especially children) who could die. A CA representative said in 2018 that as far as they knew, Alistair was getting better and recovering from their illness.[1] Alastair posted on Reddit in 2020, to thank the community for their support and confirm that they were over a year into remission[2] and posted again in 2021.[3]

The White Lions have served as the personal guard of the Phoenix King since the time of Caledor the First. White Lion regiments are often dispatched to join the armies of Ulthuan during times of particular danger, tasked with protecting High Elf generals and mages, or bolstering the overall strength of the army. White Lions are renowned for their unflinching courage in the face of overwhelming odds and terrible horrors, protecting their charge whatever the foe and regardless of the danger to themselves.

Alastar is a strong secondary lord to get when you want to raise a second army. His unique item gives him a small leg up on other Lords. For Teclis, he can be a nice boon as a strong melee lord, given that Teclis is a spellcaster primarily. Under the ai he has a tendency to recruit a number of White Lions, so armored infantry be warned.