Alith Anar is a High Elves Legendary Lord introduced in Total War: Warhammer II as a free DLC in the Resurgent Update. They can be downloaded free from Steam here. Alith Anar is the Shadow King, a revenant who seeks the grisly death of every Dark Elf in retribution for Malekith’s sins.

In the campaign, he leads the Nagarythe faction.

Tradition maintains that the folk of Nagarythe chose Alith Anar as ruler after Malekith fled into the west. The Lord was the last heir of a great line, his forebears slain by the Witch King’s minions. In the following dark days there were many Druchii still hiding in Ulthuan, so Anar took to their eradication. Those not slain in battle were crucified upon trees - grisly monuments to the vengeance of Nagarythe’s Shadow King. He became a revenant who sought the death of every traitor-kin who dared live in the Sundering’s wake. Even now, thousands of years later, the Shadow King still hunts, and will not rest his bow until Malekith’s death. 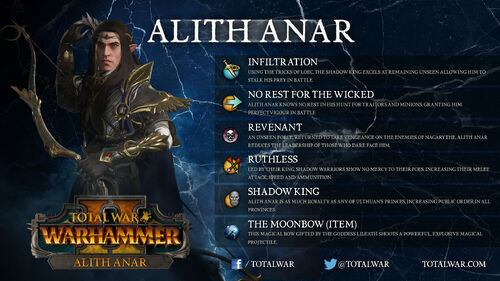 The premiere ranged Legendary Lord, Alith Anar is capable of taking out enemy Lords long before they even get to melee range. His range is massive at 300, which is comparable to artillery range. While he can do decently against lower tier enemies in melee, Alith should almost always be sniping enemies and moving, as it is where he shines. His move speed is 46 which is quite high for infantry, but any cavalry will be able to catch him easily. When upgraded in campaign, he can be almost impossible to pin down, with fast speed, infinite vigour and the ability to make doubles capable of harming the enemy.

When going against Alith Anar, cavalry is key. His ranged damage will soften up heavily armored units and Lords too much to be practical, and even a mounted Lord may be significantly damaged before closing the gap. Factions such as the Vampires or Skaven can summon a unit to immediately tie him up and take him out of ranged combat, which can allow damage dealers to close the gap and finish him off.