An Ocean of Opportunities 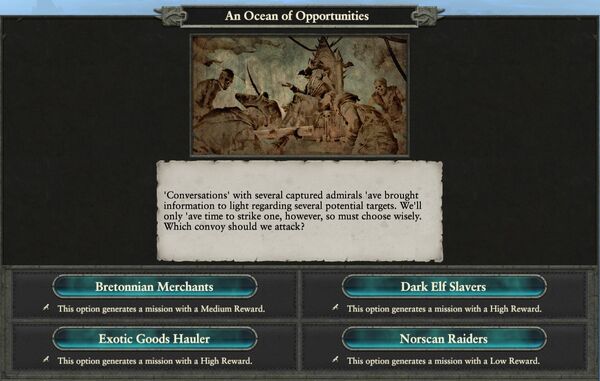 The choices in game.

An Ocean of Opportunities is a dilemma for the Vampire Coast. Each option will give you a special Mission to defeat a Lord's army in battle.

'Conversations' with severeal captured admirals 'ave brought information to light regarding several potential targets. We'll only 'ave time to strike one, however, so must choose wisely. Which convoy should we attack?

Those sanctimonious sops in armour, the Bretonnians, 'ave sent an 'eavily-defended convoy of merchants ships our way. Crow reckons they be heading to Araby, and by their sluggishness I'd say they're carrying a goodly haul by those escorts. Let's strike now an' take their riches for ourselves!

So... it would appear that some enterprising fellows from the New World 'ave decided to risk it all against the elements an' of course ourselves, who surely 'ave nothin' left to lose anyway. It's looking pretty likely that Sartosa is their destination. Though they're well protected, taking their cargo as our prize presents an opportunity we daren't pass up.

A convoy of Dark Elf slave ships are heading back to Slaver's Bay, laden with captives raided from Ulthuan's coasts. We should free them... not for altruistic reasons, you understand, but because of their potential as fresh recruits to go on account with us an' join the crew - drowned, raised 'n' bound, they'll be worth more than a cutter full o'gold sovereigns!

Pah! Northmen! Those stinkin' Norscan raiders 'ave been spotted heading back north of Naggaroth frozen following a successful raid on the coasts of the Empire. This particular tribe are known always to take captives for ransom at a later date, so this is an ample opportunity to fill our ratings.