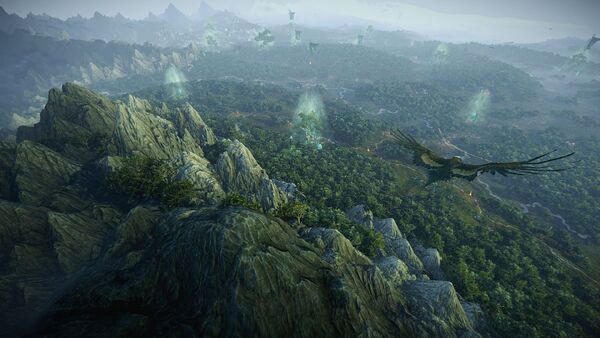 The forest of Loren, viewed from the nearby Grey Mountains.

Athel Loren is a region of magical forest located inside the Old World. It features heavily in the Season of Revelation mini-campaign.

The forest is an ancient, mysterious and dangerous place full of wild creatures and spiteful forest spirits such as Dryads and Treemen. The Wood Elves inhabit the forest, but they are just as fickle as it's other denizens and will mercilessly kill any intruders.

Additionally, the forest is somewhat similar to The Chaos Wastes in that it does not always follow the physical laws of the world - one part of the forest may be in constant night or day, another in constant winter or summer. Time may flow more slowly or quickly inside the forest than outside, so someone might enter the wood for a few hours and then leave to find 100 years have passed.

A boundary of magical standing stones keeps the forest from expanding too far outwards. The most dangerous part of the forest is the Realm of Cythral, also called the 'Wildwood', which is where the Wood Elves imprison the most destructive forest spirits. At the heart of Athel Loren lies the huge Oak of Ages, a magical tree which is linked to the life of the forest and the Wood Elves. The Oak extends it's worldroots across the world.

In Total War: Warhammer, Athel Loren is the main focus of the Season of Revelation mini-campaign which requires the Realm of the Wood Elves DLC.

Who can occupy Athel Loren?

In the regional occupation system, the forest can only be colonized by Wood Elves factions.

Athel Loren has the following provinces in campaign.

The Old World and Mortal Empires

Before Athel Loren was added to The Old World along with the Realm of the Wood Elves DLC, the area was made up of impassable forest.