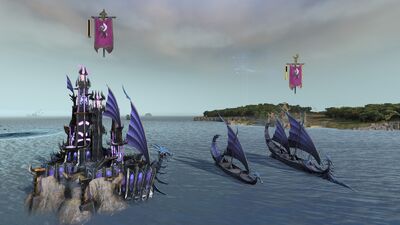 Not to be confused with Black Ark (building).

Black Arks are huge floating fortresses available to the Dark Elves in campaign.

Black Arks can only be recruited at a port settlement after performing the Sacrifice to Mathlann rite. Each time the rite is performed, 1 Black Ark becomes available.

The exception to this is the The Blessed Dread which gets a Black Ark for every coastal/port settlement they control.

Black Arks work similar to hordes, in that they can construct buildings like a settlement, but can also recruit units and move around the map, like an army. They can also exchange units with any army which has embarked upon the water. Obviously though, Black Arks are restricted to the ocean/waterways. Black Arks have their own Black Ark growth which buildings require to upgrade.

Black Arks can attack and be attacked by embarked armies, which takes place on a unique battle map

Unlike hordes, Black Arks do not have to enter encamped stance to recruit units.

Like armies and hordes, Black Arks can treasure hunt in the ocean.

As of the potion of speed update, Black Arks can attack and blockade a port settlement, and colonize a ruined coastal/port settlement.