Blood Kiss is a unique resource to the Vampire Counts race. Awaken ancient and powerful Vampire Bloodlines and consume Blood Kisses which are acquired by killing faction leaders in battle, by assassination, or by vassalising factions. 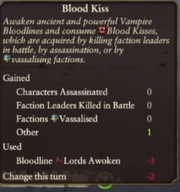 This resource is meant to reflect the vampires of your faction converting an enemy character into a vampire or infiltrating the notables in their faction.

The Von Carsteins subfaction and Mannfred von Carstein both start with a single Blood Kiss.

The resource is used to awaken one of the five types of Bloodline Vampire Lords and unlock the buffs their bloodline grants. Each bloodline has three tiers, unlocking a lord at each and providing progressively better buffs as you go along. The cost of Blood Kisses per tier also increases from 3 (Tier I), 6 (Tier II) and 9 (Tier III).

Tier 3: Public order -60% penalty due to presence or lack of corruption

The "Blood Kiss" is the method used by Warhammer vampires to convert regular humans into vampires. While the name is suggestive, the actual process of the Kiss is unknown, and one of the greatest secrets of the undead aristocracy. The outcome is both a physical, mental, and spiritual transformation, corrupting or destroying the person who existed before and replacing them with a darker self. There does not appear to be any physical limit to how often vampires can give the Blood Kiss; however, vampires are legendarily selective as to just who they will invite into their exclusive bloodline, seeking only the most exceptional examples of humanity. Vampires treat this act as almost a birth, with the new vampire being "child" to the creating "parent", and lines of responsibility are thusly drawn, giving even more reason to make sure that they do not create new vampires who will act rashly or shamefully.

For lore reasons on why you need to be selective about who you choose, see Konrad Von Carstein.