"What is a knight without his steed? But what is the steed without his knight? Knight and steed, noble and peasant; on such relationship is Bretonnia built."

Bretonnia is a major race introduced in Total War: Warhammer. It was added as part of the Bretonnia update free content.

They are playable in campaign, custom battles and multiplayer.

Bretonnia is the largest and most powerful nation of men in the Old World, after The Empire. They are less technologically advanced than their neighbours, but are sheltered and protected by their geography. Bretonnian society has a strict division between the nobles and knights, and the lowly peasants who often live in squalor. The race is strongly based on arthurian legends and medieval France. Their armies consist of more numerous, cheaper peasant units fighting alongside a variety of powerful knights.

A summary of Bretonnia gameplay:

Bretonnia is the third largest nation of men after Cathay and the Empire. It is a feudal society protected by hosts of knights, considered by many to be the most powerful heavy cavalry in the Old World. Bretonnia also has an underclass of oppressed peasant serfs, who are recruited as archers and spearmen-at-arms who act as a more expendable meatshield for elite knights.It is located to the west of Sigmar’s lands, separated from them by the southern and northern Grey Mountains. The nations trade via several critical mountain passes and on the whole relations remain cordial, although they have gone to war many times in their turbulent history. Bretonnia is a feudal society, split between the savagely poor majority and the rich nobles with their gallant Knights standing above the filthy rabble. In theory, the Knights of Bretonnia - the flower of its military - have a code of chivalry that forms an unbreakable duty to protect its citizens. In practice, Knights are often selfish, greedy, political creatures, more interested in procuring the shiniest armour and attending tournaments than safeguarding the basic needs of the smallfolk.

However, when the Knights of Bretonnia do go to war they are undeniably proficient. They are considered the most powerful heavy cavalry in the Old World by many, although no doubt the Knightly Orders of the Empire would contest this. Armies of Bretonnia contain Knights of various stages and statuses. The Knights of the Realm are the most numerous, but there are the more exotic Pegasus Knights, as well as many others who have received visions from the Lady, the Goddess of Bretonnia, to seek her out. Finally, there are the Grail Knights, those who have found the Lady and supped from her mythical Grail to become something more than mortal. For them, earthly desires such as wealth and political aspirations no longer matter. All they care about is the chivalric code, in the truest sense of the word.

However, a Bretonnian army rarely consists of Knights alone - squires and men-at-arms form ranks of solid, if unremarkable, foot troops and peasant levies are provided to soak up damage from unchivalrous cannons and other ranged devices. Although the Knights are only too happy for their own side to field large trebuchets, they would never dirty their own hands in such cowardly ways. And so it is the Knights of Bretonnia march forth with lances dipped, and a prayer to the Lady on their lips!

The Bretonnian unit roster is focused mostly on heavy cavalry, and this is where their killing power comes from. Many of their traditional shock cavalry units have a Bonus vs. Large making them come out on top of most cavalry engagements. They also have heavy cavalry capable of holding their own in extended melee engagements with infantry. However it would be a mistake to ignore Peasant Bowmen or Spearmen-at-Arms who provide an important shield for valuable units of Knights of the Realm and Grail Knights. Bretonnia also has many powerful flying units such as Pegasus Knights, and even some monstrous units such as Hippogryph Knights. King Louen Leoncoeur himself has the valuable regeneration ability.

The Bretonnian factions have several Regiments of Renown available. These are elite, unique versions of standard Bretonnia units. They were added for free in the Foundation Update. Players must sign up for / log into Total War Access, to get the regiments of renown for free. 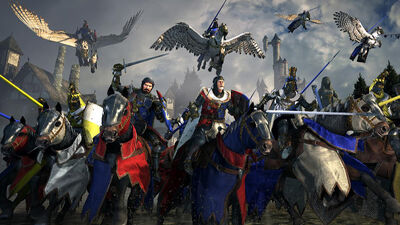 A Paladin leading Knights of the Realm and Pegasus Knights.

The Bretonnian factions are normal, non-horde factions that control settlements and provinces.

Legendary Lords for the Bretonnian factions:

Vows and Troths is a campaign feature added to Bretonnian factions in the Doomsayers Update for Total War: Warhammer II.

Peasant Economy of Bretonnia puts a limit on how many peasant units can be recruited into armies. Going over this limit will incur penalties. Occupying new settlements increases the limit.

Chivalry is a campaign mechanic whereby certain actions increase chivalry and provide faction-wide bonuses in tiers. If chivalry drops too low, it will incur penalties instead. Chivalry is tied to Bretonnia's victory conditions.

The Green Knight is a unique hero unit that Bretonnia can recruit in the campaign after reaching certain tiers of chivalry.

He is also available in multiplayer and custom battles.

Lance Formation is a unit ability on certain Bretonnian cavalry which confers bonuses and allows them to pierce enemy lines. They are the only race who can change formation like this.

The Bretonnia tech tree received a major update in The Reprisal Update for Mortal Empires in Total War: Warhammer II.

Note: Raiding as a Bretonnian faction reduces your Chivalry and can even result in negative traits for your Lord.

Under the regional occupation system of Total War: Warhammer, Bretonnia can only occupy temperate lowland provinces. They cannot occupy mountains/badlands areas which are restricted to the Greenskin Tribes and Dwarf Realms. Nor can they occupy the Norscan peninsula.

All of the Bretonnian factions start in Bretonnia, in the western parts of The Old World. An exception to this are the Chevaliers de Lyonesse who start in The Southlands.

In the campaign, many minor AI factions are grouped together under Bretonnia (Bretonnian Kingdoms in Total War: Warhammer I).

The Season of Revelation

The Eye of the Vortex / Mortal Empires

Mortal Empires also includes all the minor factions from The Old World campaign.

Bretonnia can be downloaded for free from Steam here.

Bretonnia's regiments of renown units can be downloaded by signing up/logging into Total War Access and going to your dashboard.

The faction of Chevaliers de Lyonesse can be downloaded for free from Steam here.

This is a proposed strategy written by a Total War: Warhammer Gamepedia editor and should only be seen as a tip on how to play or overcome obstacles.

How to play Bretonnia in the Campaign[edit | edit source]

How to play Bretonnia in Battle[edit | edit source]