Chaos Trolls are a Warriors of Chaos melee monstrous infantry unit introduced in Total War: Warhammer. Though temperamental and difficult to control, a Troll is a whirling ball of difficult-to-kill death.

Chaos Trolls are malformed monsters whose lack of intelligence is as legendary as their great strength. Chaos Trolls are greatly feared because of their unthinking ferocity and indiscriminate appetites. Like all their kind, Chaos Trolls can vomit forth the steaming contents of their guts, dissolving their victims with powerful acids and flesh-eating worms. They are also possessed of powerful regenerative abilities: lost limbs and even heads can grow back. However, Troll flesh is extremely susceptible to the mutating power of Chaos, and Trolls who have lurked too close to the Realm of Chaos find tentacles, screaming maws and even stranger mutations sprouting from their wounds.

Chaos Trolls offer good AP damage and regeneration but will rout quickly if pressed hard. As with other race's versions they do best when mixed in with infantry to prop up their leadership and limit the damage they take to what their regeneration can keep pace with. As the Warriors of Chaos already have excellent infantry, they don't often need trolls to do what is asked of them. Marauders lack AP damage and durability and would benefit the most from the addition of trolls. 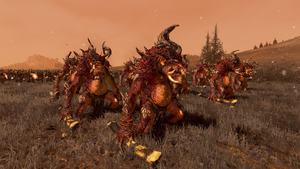