"I remember the arrival of the Elves, long before they became the Asrai. I watched as they first ventured into the green. They were so full of fear. I laughed as their blood was spilt upon the forest floor. I screamed my fury when our fate became entwined with theirs. It was a mistake, but their time among us has come to an end..."

Drycha is a Wood Elves Legendary Lord introduced in Total War: Warhammer II as a free DLC for owners of the Realm of the Wood Elves DLC in the Mortal Empires campaign.

In the campaign, she leads the Wargrove of Woe faction.

Drycha, the Briarmaven of Woe, is among the most powerful forest-spirits of Athel Loren.

Long ago, Drycha held court amongst the roots of Addaivoch, the once-glorious creature known in recent times as the Tree of Woe. Most believe that Drycha lost her mind when Morghur’s death tainted that ground forever, but in truth, she was capricious and malevolent for many long years before that tragedy. Drycha remembers well the days before the coming of the Elves, and has ever rued the folly that shackled the forest to mortal whim and fate. She rarely converses with others, even the Dryads who serve her as handmaidens, but instead chants a mantra of the names of all those fellow spirits whom she believes have been failed by the Elves. As old as Drycha is, she still possess a crystal-clear memory, and it is doubtful that she will ever reach the end of her tally; new names are added with every battle between Athel Loren and the outside world.

In the early years of the alliance between the Elves and forest, Drycha was ever in evidence about the glades and groves, watching the Elves and examining their every action for any sign of betrayal. She has been seen little in the years since Morghur’s blood was spilt upon her glade, though she is known to commune with Coeddil, a Treeman of great age and power, and serves as his herald while the great being lies shackled in the depths of the Wildwood. Such a thing cannot help but provoke unease, for Coeddil’s distrustful attitude of the Wood Elves is legend. He is so incredibly ancient that it is difficult to ascertain his motivation, for Coeddil has forgotten more than many younger beings — the Elves included — will ever know. If these two embittered spirits have found common cause, as it appears, it can only be a matter of time before the balance of Loren forest is thrown into disarray.

In recent years, strange tales have come to Athel Loren, worrying rumours of Drycha’s activities. On the fringe of the great Drakwald Forest in the Empire, the peasants tell stories of the trees that come alive, hungry for blood. On the edge of the Forest of Arden in Bretonnia, villagers gather only deadwood for their purposes, citing tales of other settlements found ruined and torn, the inhabitants left as scraps of tattered meat by the vengeance of the trees. To many, these events seem as senseless as they are apparently random, but if they are indeed the work of Drycha and her handmaidens, there must surely be a greater goal behind them than mere slaughter — though what that goal is remains to be seen. Alas, even Naieth the Prophetess cannot see the destination for which Drycha strives, for the road leading there is hidden by blood and horror. 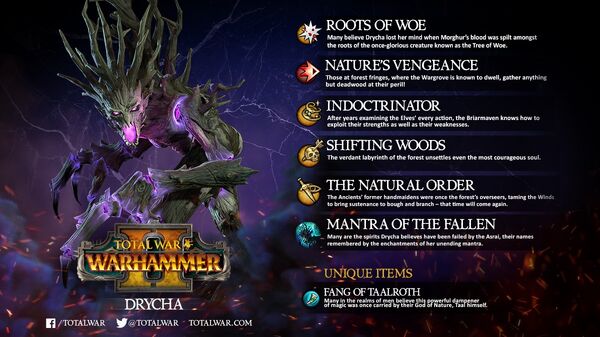