The Dwarfs are a race introduced in Total War: Warhammer. They have three playable factions and four Legendary Lords to choose from.

The Dwarfs are an ancient, proud race of warriors and craftsmen who dwell in great halls deep under the mountains. Easy to offend, they record every grudge in a great tome, written in the blood of kings. Dwarf armies can move through the underway to avoid danger. Most of their units are heavily-armoured infantry, powerful artillery and advanced war machines. Dwarfs have no spellcasters, cavalry or monster units.

Dwarfs are a proud, bearded folk who are quick to temper and easy to offend, with a love of gems, gold and other precious metals. They are short, generally no taller than five-and-a-half foot in height but are broad with powerful arms and stout legs. Dwarfs are master craftsmen; they see the work of other races as inferior and even have a special word in their lexicon for man-made devices which they call "umgak", to mean shoddy. Much of this learning has come from eons of carving out their homes in the mountains; the strongholds under the World's Edge Mountains were undisputable wonders of the world - massive underground cities known as ‘Holds’, and in the lower levels great industrial centres in the form of smelteries, forges and mine works digging ever deeper into the roots of the mountains.

With their Dwarfholds established across the World's Edge Mountains and far beyond, the Dwarfs prospered for many generations. But then came the War of the Beard, a devastating continent-spanning conflict with the High Elves. This decimated the Dwarf Empire, leaving the network of Holds weak. Then their realm was riven by a chain of devastating earthquakes; that’s when the Goblins and other things struck. The Dwarfs' true enemies were revealed to be the devious Goblins, who had for so long coveted their grand halls. Thus the golden age of Karaz Ankor - ‘The Everlasting Realm’ in the Dwarfish tongue of Khazalid - ended.

In recent times, the Dwarfs are a race barely holding onto glories past, with only a few strongholds remaining in their hands and the rest lost to enemies or abandoned to the elements.

To this day the Dawi – as they call themselves - still fight; their ultimate goal is to restore their empire. With their belligerence, such a thing is possible. A Dwarf army or ‘throng’, is a powerful force, consisting of stoic Warriors and using wonders of technological accomplishment that put all other races to shame. Gyrocopters and Gyrobombers fly above the battlefield while cannons fuelled by flame and steam spew death. Dwarfs do not call upon the Winds of Magic in the same way as Elves or men. To them, magic is a tangible thing, something that can be worked into axes, stone or even cannonballs. This is rune magic and Runesmiths, the masters of the art, are adept at creating arcane devices and weapons of great power.

It is with all these elements - stalwart Dwarfish hearts, exceptional armour and weaponry, and their unmatched machines of war - that High King Thorgrim Grudgebearer plans to retake his realm, slaying every last stinking Greenskin in his way! Few doubt his resolve, and for the first time in many generations, the Dwarfs are truly roused to battle - the Great Reckoning begins! 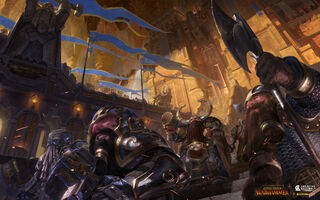 Dwarfs marching to war with High King Thorgrim Grudgebearer sitting high above in the distance.

Dwarfs armies are mostly made up of stalwart, heavily-armoured infantry backed up by powerful artillery, war machines and tough characters. Dwarfs have very high leadership, meaning they will rarely rout – in fact Longbeards even have a leadership aura similar to characters. Even basic Dwarf units are heavily armoured which can make them hard to deal with early in a campaign, before most factions have armour-piercing units. In fact, Dwarf units tend to have high stats in general. Like factions such as the High Elves, Dwarf units tend to be expensive and they rely on quality over quantity.

Most Dwarfs units are quite slow moving, however the flying Gyrocopters and Gyrobombers are an exception. These war machines are invaluable for their speed, but weak to flying monsters.

Dwarfs have excellent ranged units, many of which perform decently in melee as well. Their artillery are arguably some of the best in the game, with many different powerful options.

Many Dwarfs units have fire or explosive damage. Some like Rangers and Miners, have vanguard deployment.

Dwarfs have no spellcaster units meaning they cannot use magic. They also have no cavalry or chariots, and no monsters of any kind.

Instead, all Dwarf units have an innate resistance to magical damage. Additionally, their Runesmiths and Runelords have abilities to reduce the winds of magic available of enemy spellcasters in battle. Any Winds of Magic used in battle against them is better spent on augment and hex spells, since Magic Resistance only applies to damage rather than effects. To counter cavalry and chariots, many Dwarf units have charge resistance. To counter monsters, Dwarfs have the Slayers unit which are unbreakable and thus not affected by fear and terror as well as a bonus versus large units.

The Dwarfs are a non-horde race that can occupy settlements and control provinces.

The Dwarfs have three playable factions with four Legendary Lords to choose from:

Experts in binding the Winds of Magic to stone or metal, Dwarfs can use Oathgold in conjuction with trade resources to make magical weapons, armour, talismans, and enchanted items to improve their strength in battle.

Dwarfs maintain a record of all grievances commited against them in the Dammaz Kron, their 'Book of Grudges'. Losses suffered by Dwarf factions are recorded so that they may be avenged later.

Dwarfs use the Underway to travel underneath otherwise impassable terrain.

Dwarfs have the following post-battle options after winning a battle:

Dwarfs have the following settlement options after successfully sieging a settlement:

Dwarfs can issue the following commandments when all settlements are owned in the selected province:

Dwarfs have the following climate preferences:

During a Chaos Invasion, the AI Dwarf factions gain the Shield of Civilization trait along with certain other races.

The Dwarfs can be expanded upon with the following downloadable content:

On the campaign map, many factions are grouped together as Dwarfs and use units from the Dwarfs unit roster.

This faction was replaced by Clan Angrund when The King and the Warlord was released:

Introduced in the Eye of the Vortex campaign:[edit | edit source]

How to play the Dwarfs in Campaign

How to play the Dwarfs in Battle & Unit Roster

How to play the Dwarfs Lords and Heroes