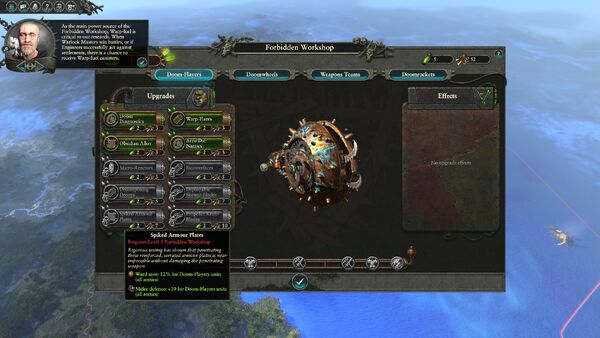 A screenshot of the Workshop in action.

The Forbidden Workshop is a campaign feature available only to the Clan Skryre faction. The player can spend Food and Warp-Fuel to buy upgrades and abilities for certain Skaven units, unlock campaign-only Regiments of Renown, or construct Doomrockets.

How it works[edit | edit source]

The Forbidden Workshop is accessed while viewing the campaign map, using a button in the bottom right of the UI.

The upgrades are separated into four tiers that are unlocked when a set of conditions have been met for each one.

As you invest in the Doomwheel, you will be unlocking the following rare items:

In the end, it unlocks the Warpfire's Wheel unique powerful Doomwheel. Its main advantage is the Regeneration.

Afterwards, the bonuses unlock the three unique Weapon Teams. The Doombringers gain Charge Defence vs. Large and become Unbreakable in comparison to normal Warpfire Throwers. The Eye-Takers do not break shields like normal Warplock Jezzails but blind their victims instead and get the Hawkish Precision augment for more AP damage.

The Endless Drum passive for the Ratling Guns does indeed make their ammunition endless, as when ammunition reaches 20%, regeneration of ammunition will be applied, and is therefore a must-have upgrade if one plans to use Ratling Guns effectively.