The Greenskins are a playable race introduced in Total War: Warhammer. They have five playable factions and five Legendary Lords to choose from.

Greenskins is the collective term for Orcs, Goblins and other similar races. These unruly warriors dwell in the Badlands, mountains and other wild areas and love nothing more than a good fight. From time to time, they will come together in a great “Waaagh!” - an invasion of civilised lands. Armies of Greenskins feature masses of poorly-disciplined infantry, alongside boar-riding cavalry and monsters like trolls and giant spiders.

Orcs and Goblins are the scourge of the Old World. Collectively known as Greenskins, they are an aggressive and brutal race with an unquenchable love of fighting. For most nations, war is a means to an end - an act of aggression to conquer and dominate an enemy. However, the Greenskins - and the Orcs in particular - revel in battle purely for the sake of it. Orcs are built for violence - brutal, bullying creatures of jutting jaws and hulking appearance. The Goblins, by contrast, are smaller but more cunning as they mob up in greater numbers. This motley cast is supported by a fell menagerie of other creatures from wolves to Trolls, monstrous spiders to lumbering Giants.

Yet it’s the Orcs that dominate - their violent temperament keeping them top of the Greenskin tree. Orc attacks range from raids to mighty Waaaghs! where Greenskins of all stripes congregate in their tens of thousands under a single leader, who they believe has been chosen by Gork (or Mork) - the fickle gods of Orc-dom - to lead the mighty green tide on a rampage across the world. It is the Waaagh! that the other, weaker, races fear the most, as once an Orc Warboss gains enough momentum his horde can only ever be stopped at great cost. The Empire is a common target - having been ravaged countless times by infamous Waaaghs! throughout history. Yet it is the Dwarfs that harbour a special hatred of Orcs and their despicable kin, as the Dawi have lost many of their legendary strongholds to Greenskin incursions.

While the Greenskins have made lairs in ransacked Dwarfen holds, they can be found across the world - the majority residing in the arid Badlands, mainly fighting amongst themselves and occasionally coming together as a greater threat. Now such an occasion is upon us, for Grimgor Ironhide comes south. Goaded by Gorfang Rotgut, the boss of Black Crag, Ironhide marches with his Black Orcs. Once Black Crag is his, surely the Badlands will follow? And then the rest of the Dwarf realms shall fall to his ever-growing Waaagh!, all while the Empire and the other humie realms burn. This is what Gork and Mork demand; please them and ensure the mobs shout the name "GRIMGOR" for the rest of time! 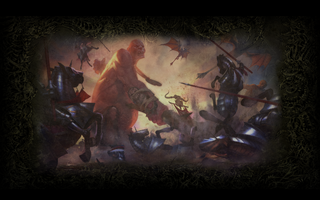 A Giant smashing a squadron of Reiksguard with his club.

The Greenskins have a diverse unit roster which is not really lacking in any one area. There are many kinds of fairly cheap or expendable infantry, ranged and melee cavalry, heavy infantry such as Black Orcs, warbeasts, chariots, artillery (eg: the Doom Diver) and monstrous units such as Trolls, Arachnarok Spiders, Giants. Their sole flying unit is the Wyvern, available as a mount.

Waaagh! is an ability available to all Greenskins lords which gives speed, melee attack and charge bonus to all units in their army.

The Greenskins are a non-horde race that can occupy settlements and control provinces.

Not to be confused with the Savage Orc Tribes who are a minor race of Greenskins that will become hordes when they don't control any settlements.

The Greenskins have five playable factions with five Legendary Lords to choose from:

A Waaagh! is an unstoppable force that can be unleashed once your faction gains sufficient

Reputation through winning battles and razing settlements. Once a Call to Waaagh! is targeted against an enemy, additional mobs will flock to your armies for a period of time as your

Lords' Waaagh! battle abilites are temporarily boosted. Razing the enemy's capital within the allotted time or occupying it when the Waaagh! ends will grant a trophy and rewards in addition to building momentum towards the next Call to Waaagh!.

Greenskins know not to waste good battle salvage, actively gathering any bits of

Scrap they find after battles or razing settlements. Scrap can be used to upgrade and improve the boyz' armaments or research technologies.

The Greenskins' tribal hierarchy is brutal, but simple. Bash in enough heads and take enough loot, sooner or later you're going to get some mobs and become a Warboss. Beat up another Warboss in battle, his mobs will become yours too, since loyalty is a concept neither Orcs or Goblins really care for.

Be aware that subjugating another Warboss and his tribe also means taking over their territory, leading to a larger empire to oversee - perhaps just keep things simple and bash in his head too!

Greenskins can sneak through the

Underway to travel beneath otherwise impassable terrain. Doing so is not without risk, however, as Greenskin armies can be intercepted by armies above and brought to battle, even by races that cannot use the Underway themselves.

Settlements that contain the

The resource can mainly be found in the Southern Badlands, but is also present in the Western Badlands and the [Southern] Jungles of Pahualaxa.

Settlements that contain the

The Savage Orc building chain will unlock the following units:

Greenskins have the following post-battle options after winning a battle:

Greenskins have the following settlement options after successfully sieging a settlement:

Greenskins can issue the following commandments when all settlements are owned in the selected province:

Greenskins have the following climate preferences:

The Greenskins can be expanded upon with the following downloadable content:

On the campaign map, many factions are grouped together as Greenskins and use the Greenskins unit roster.

Not to be confused with the Savage Orc Tribes which are a minor race of Greenskins.

These factions were replaced when The King and the Warlord was released:

Orcs of the Bloody Hand

Introduced in the An Eye For An Eye campaign:[edit | edit source]

These factions only appear in this campaign:

Introduced in The Season of Revelation campaign:[edit | edit source]

These factions only appear in this campaign:

Introduced in the Eye of the Vortex campaign:[edit | edit source]

How to play the Greenskins: Campaign Strategy

How to play the Greenskins: Unit Roster & Battle Strategy

How to play the Greenskins: Lords & Heroes