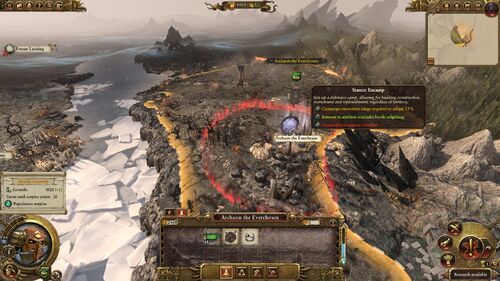 Not to be confused with Rogue Armies or Black Arks, which are similar.

In battle mode, horde factions are no different to normal factions.

How they work[edit | edit source]

Hordes don't occupy settlements on the campaign map. Instead they have their armies enter encamped stance to quickly create buildings before moving on.

Horde armies have a maximum of 10 building slots when fully upgraded.

As horde factions cannot take over a settlement, they will always sack, loot, or raze it after conquering. This also means horde armies cannot garrison a settlement.

Horde faction buildings often don't generate much income, so horde factions rely on the money they get from winning battles and sacking/razing enemy settlements to get money.

Because hordes do not occupy settlements, they are not affected by climate or regional occupation. However, they can still face attrition due to corruption (or lackof) and terrain.

Horde growth can be increased by razing settlements.

Recruiting a new Lord from your horde starts a new horde. This requires population surplus. New hordes must often be protected until they are large enough to survive on their own.

Not to be confused with fightiness, a Greenskin mechanic which is similar.

An Eye For An Eye

Eye Of the Vortex

Note that some non-playable hordes--such as Rogue Armies and Savage Orcs--can take over settlements, though the amount of buildings they can create is limited, and they otherwise continue to function as a Horde army.

An Eye For An Eye