Karaz-a-Karak is a playable faction of Dwarfs introduced in Total War: Warhammer. It is led by either Thorgrim Grudgebearer or Grombrindal - The White Dwarf and can be found in the eastern parts of The Old World, deep in the World's Edge Mountains.

Thorgrim Grudgebearer is the current High King of the Dwarfs. He is a throwback to the High Kings of old - eager for new conquests, mighty in battle, and a merciless enemy. Yet upon his worn brow, there also sits great wisdom, and he is able to uphold the ancient traditions as well to accept (if not embrace) needed changes, such as alliances and new technology. Thorgrim is forever brooding upon how to return his people to their former glory. As the ultimate ruler of the Dwarfs, the Great Book of Grudges is entrusted into his keeping. It is Thorgrim's avowed wish to avenge every single entry contained in that voluminous tome. Such is his resolve that he has already rejuvenated the Karaz Ankor. Tales of his deeds, and the long list of grudges already struck out, fill his grim warriors with the feeling that the Dwarfs have long done without: hope. A new age of retribution has begun.

For as long as there has been the Karaz Ankor, there has been the White Dwarf. Grombrindal is an enigmatic figure, recorded throughout the Dwarfs' history, appearing to give aid to his bearded kin whenever their situation becomes especially dire. However, what can one Dwarf do when a Karak is besieged by thousands of Greenskins, or a Dwarf throng surrounded and outnumbered by a warherd of braying, ravenous Beastmen? In Grombrindal's case, turns out he can do quite a lot; the White Dwarf is a mighty warrior, some say bettered only by Grimnir himself. Every slash of his legendary axe sees the heads of urks tumble from their dishonourable shoulders. Grombrindal has faced armies of thousands on his own and won, which is why many believe him to be a living Ancestor.

According to the bards he was - and maybe still is - the lover of the venerated hearth goddess Valaya. Grombrindal himself is never drawn on such a vulgar subject, even when the beers start to flow during the inevitable post-battle feasts. This matters little to most Dwarfs, who are just grateful to have fought beside such a legend and lived to tell of his deeds and achievements on the battlefield. Long before most other Dwarfs have sobered, the White Dwarf dons his hooded cloak and wanders away into the night - for there are always more Dawi to aid, more urks to slay!

It is a dark time in Thorgrim Grudgebearer's reign. Despite convincing his kin not to seal their Holds and diminish, their enemies are emboldened. Greenskins gathered in the shade of Everpeak. Thorgrim could not let that stand and so marched forth and slew them. But the remnants fled and now skulk in the sacred site of Grungni's Pillars. Another grudge recorded; another that needs to be settled if the Age of Reckoning is to continue!

On a visit to Karaz-a-Karak, the White Dwarf witnessed Thorgrim vanquish the Greenskins that dared skulk in the shadow of Everpeak. The Orcs of the Bloody Spears were routed, with many sent scurrying into the Pillars of Grungni. Whilst witnessing the events, Grombrindal had remained incognito, but at this outrage he revealed himself to the High King, pledging to take a throng of willing Dawi and recapture the sacred site. 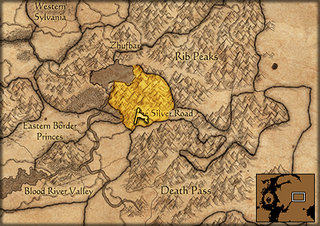 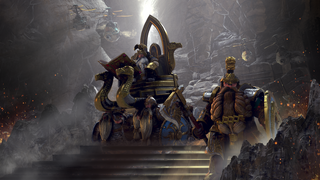 Same as the short campaign victory but with the following additions:

When controlled by the AI, Karaz-a-Karak will have the following diplomatic traits:

Karaz-a-Karak will start with the following treaties already in effect: