Kholek Suneater is a Warriors of Chaos Legendary Lord introduced in Total War: Warhammer with the Chaos Warriors DLC. Kholek Suneater is beyond all mortal reckoning. His fury and strength, like his age, are immense. Truly, he is unstoppable.

Kholek Suneater is a Shaggoth of tremendous age. He is one of the first-born kin of Krakanrok the Black, father of the Dragon Ogres. Kholek was present when the terrible pact with the Dark Gods was forged, pledging their race to an eternity of servitude in exchange for immortality. The sagas tell that Kholek's part in the bargain was such an affront to nature that the sun hid its face behind a bank of stormclouds and has never looked upon Kholek since that fateful day. True enough, Kholek's coming is heralded by roiling black thunderheads. Where the Herald of the Tempest walks, a raging storm blots out the sun.

Kholek is very unlike other Legendary Lords, with his massive size and crushing attacks. Rather than hunting down the enemy Lord, he's typically best used as a sort of cavalry, charging into enemy lines, crushing infantry, and then backing out. While he does have lots of staying power, it's always best to keep him on the move, as his massive size and intimidating presence will make him a priority target for enemy Armor-Piercing missiles and single-target spells. Obviously, he can charge into Missile Units or Artillery without a problem and get rid of them, but spells are his biggest weakness. You should obviously also watch out for enemy Anti-Large units, specifically calvalry like Halberd Demigryphs. Units like these can lock Kholek into place, and whittle his massive HP pool down to nothing in a short amount of time.

While Kholek does have plenty of abilities, his most useful is his Bombardment. Treat it like an Urannon's Thunderbolt: drop it on clumped-up, high-armor, crucial enemy units, because essentially any infantry in the hit area is guaranteed to be dead. This can be used to snipe elite units, or even destroy Artillery pieces, to prevent them from being re-mounted. While it does do a good amount of damage to enemy Monsters and Lords, it's still best used on clumps of infantry, like most AoE spells.

Kholek is an incredibly capable melee fighter and utility lord. Any skill selections are viable, although I favoured movement range, ward save, bombardment and his combat skills. Kholek is both a hammer and an anvil, with a high pool of hitpoints, resistances and good general damage, damage vs large and amour piercing damage. Good companion units are support units as even on legendary Kholek can stand alone in close combat and bring down entire armies almost singlehanded when leveled! missile cavalry, cavalry, hellcannon and sorcerers (metal particularly). A metal sorcerer on manticore in particular can provide speed and flight as well as final transmutation against the AI troops flocked around Kholek these two troops alone can level entire mid game stacks. Kholek’s weakness is his size. He cannot hide, and has a large hit box for missiles, particularly magic ones, while anti large enemies get bonuses against him. For this reason magic items which protect him against magic are useful, ones which increase his speed also give him an edge bringing him parity with horse mounted lords and hero’s. Finally a potion of healing, or better yet toughness is completely OP. 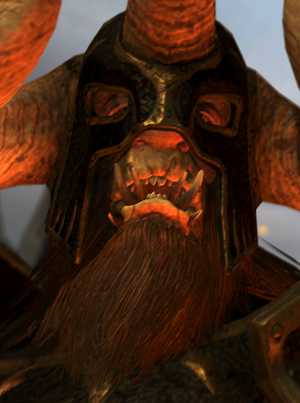