The Lizardmen are a race introduced in Total War: Warhammer II. They have six playable factions, each led by a different Legendary Lord.

Lizardmen are not a single race but a society of different cold-blooded creatures who dwell in temple-cities that tower over the southern jungles. They march to war alongside mighty reptilian beasts which resemble dinosaurs. Despite their frightening appearance, the Lizardmen see themselves as guardians of a divine order, and are ancient enemies of Chaos.

A summary of Lizardmen gameplay:

To the south of the world, in much warmer, jungle climes, live the Lizardmen. These reptilian champions of order are not one race but a collective of various cold-blooded creatures all dedicated to bringing the Great Plan of the Old Ones to fruition. The Old Ones were a godlike race - worshipped by the Lizardmen - who travelled the stars and terraformed the world in ages past, before the ancient enemy invaded.

The Lizardmen are led by the Slann Mage-Priests, who in turn are served by the adaptable Skinks, the labouring Kroxigors and the fearsome warrior-caste, the mighty Saurus. It is the Saurus that form the bulk of the Lizardmen armies for they are spawned for that sole purpose – bringing war to those deigned as enemies by the Mage-Priests.

Being cold-blooded, Lizardmen reside in the warmer climates, mainly across the jungle-continent of Lustria and the Southlands. Hidden within the undergrowth are the temple-cities where the Slann contemplate and the other reptilian castes live to serve the Old Ones’ will. Shining brightest of all the ancient temple-cities is Hexoatl, the City of the Sun. Though Itza is the First City, Hexoatl has eclipsed it in importance due to its status as home to Lord Mazdamundi, the most active of all the remaining Slann Mage-Priests. Due to its location and history, the City of the Sun is the most fortified and martial of all the temple-cities. Whereas the boundaries of most other cities simply merge with the jungle, Hexoatl has mighty walls and serried ranks of Saurus patrol its plazas. Until recently, even the Norse trespassers of Skeggi and its surrounding colonies avoided Hexoatl, although that has changed of late. 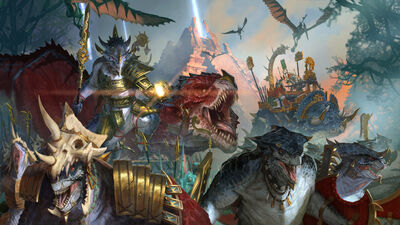 In battle, Lizardmen combine lines of slow but tough Saurus infantry, backed up by more skittish weaker and faster Skinks. They also have lots of monsters. Their spellcasters are some of the game's most powerful and versatile. Lizardmen overall are tough, fairly damaging and unlikely to break. However their mobility is average at best, and their ranged options are outclassed by races like High Elves, Dwarfs and The Empire. Though it is worth noting that some ranged Lizardmen units have poison or fire attacks.

Lizardmen spellcasters have access to the Lore of High Magic, Lore of Fire, Lore of Light, Lore of Heavens and Lore of Beasts.

Many Lizardmen units have the potential to rampage after staying in battle too long. Normally this trait is only found on wild or feral units in other races, but many Lizardmen line units such as Saurus Warriors can rampage. When a unit rampages, it gains stat bonuses and will automatically charge/engage the nearest enemy unit in melee. The player loses control while it is rampaging. Units will not break and flee while rampaging.

All Lizardmen characters have an ability called Cold-Blooded which increases the leadership of a unit, and stops it rampaging if it is doing so.

Lizardmen factions are normal, non-horde factions who occupy settlements and control provinces. The exception to this is Nakai the Wanderer's faction Spirit of the Jungle who operates as a horde faction while giving settlements that he has conquered to the Defenders of the Great Plan Faction (his vassal).

In campaign, Lizardmen have six playable factions, each with their own starting position and led by different legendary lords. See individual pages for details and strategies.

In the Eye of the Vortex campaign, Lizardmen compete to control the Great Vortex by using Rituals. Nakai the Wanderer does not participate in the race for the Great Vortex and has a separate campaign.

Geomantic Web is network of magical energy that links Lizardmen settlements together and increases the strength of Lizardmen commandments. The Geomantic Web is strengthened by certain buildings, and by owning whole provinces.

Lizardmen can perform several rites to spawn armies of monsters, allow them to recruit Slann Mage-Priests or give other bonuses.

Lizardmen post-battle options are as follows:

Lizardmen have the following climate preferences for settlements:

During a Chaos Invasion, the AI Lizardmen factions gain the Shield of Civilization trait along with certain other races.

With high armor , high leadership, rampage, light domain of magic , strong healing , strong tanks , lizardmen are one of the strongest faction to lead an attrition battle. Saurus are slow but resilient , and you can can build up an army just in this fashion . Be sure to have good anti-large flanks or a strong anti-large cavalery , and be sure that most of armies will bend under the saurus hits. Try to snipe artillery or dangerous skirmisher, and your line will do the rest.

Lizarmen are is composed by two fashion of units : Powerful, low damage output and slow sauruses, and good DPS and mobile skinks. If you can't be aggressive with sauruses, you can be with skinks : They are cheap , got good number of model in units , they often have poisonous attacks, they are fast , can move while firing , lots of them have vanguard deployment. Moreover, those units are not bad in melee, making a hardtime for cavalery to put them down , especially if other units fire on them.

A good Strategy , in a roman fashion, is to aggressively deploy 4-10 units of Skinks (lesser in late game) in vanguard, and aggress instantly the opponent army, in order to weaken its front line OR skirmisher, attract its cavalery far from its line , attracts fire (javeline skinks are specially designed in this goal), and dislocate the enemy army. You may even attract artillery fire on lesser units than on your saurus line.

Javeline skinks are already designed to charge the enemy line before the Saurus do, with a relatively good melee defense, in order to glue the opponent line and allow your saurus units to be applied at the best place and moment.

With weaks defenses armor and moral , skinks will disband quickly, but their number allow them to reforme several time and get back to fight, and their low price allow you to reform them after the battle easily.

After the skinks weakened the enemy lines , saurus will link it and crush it in a stronger version of attrition battle. Many Saurus players just rely on powerful slow line and regeneration , and count on monster and magic to win the battle. This is an alternative play to surprise your opponent in very fast aggresive playstyle

The following non-playable NPC factions are grouped as part of the Lizardmen race.

How to win as Lizardmen[edit | edit source]

How to play the Lizardmen in Campaign[edit | edit source]

How to play the Lizardmen in Battle[edit | edit source]

How to play the Lizardmen Lords & Heroes[edit | edit source]