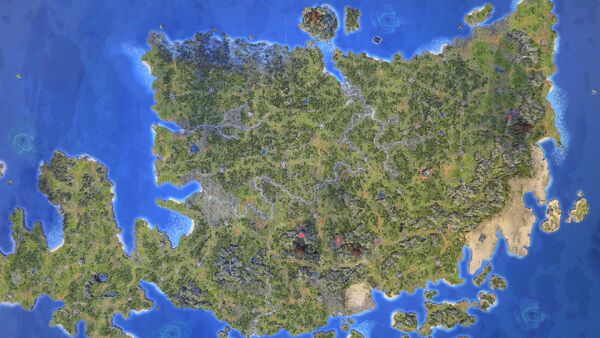 Lustria, with east at the top.

Lustria is a southwestern continent in the world of Warhammer. To the north Lustria is connected to Naggaroth via a land bridge called the Isthmus of Lustria, while east across the Great Ocean lies The Southlands. Lustria is a tropical continent, and is dominated by the Lizardmen, though many other races also have a presence there. The Spine of Sotek mountain range runs along the west coast. Lustria is considered to be very dangerous: tropical diseases abound, much of the wildlife is poisonous, and the jungles are home to ferocious reptilian monsters such as Stegadons and Carnosaurs.

Climate: Mostly jungle, with some savannah and small areas of mountain and desert.

Terrain: Mostly dense forest, with many rivers and swamps.

There are also many ruins on the continent, remnants of the many Lizardmen Temple-Cities that were destroyed during the Great Catastrophe and the first great daemonic invasion of the world.

Eye of the Vortex[edit | edit source]