Prince Sigvald the Magnificent is a Warriors of Chaos Legendary Lord introduced in Total War: Warhammer with the Chaos Warriors DLC. Unblemished, frozen in time, pristine - the skin-deep appearance of Sigvald belies a twisted, corrupted, vicious soul, hungry for destruction.

Though he appears to be little more than sixteen summers of age, Sigvald the Magnificent has blighted the world for over three hundred years. The personification of beauty on the outside, but rot within, Sigvald rides at the head of an army of utterly devoted followers who would give their lives for him without a second thought. His elite bodyguard bear mirrored shields so that Sigvald might bask in his own divine glory, and dozens of exotic females attend to his every whim and desire. Such are the depths of Sigvald's self-obsession that he will even call his retainers to attend him with their mirrors in the midst of battle, preening and murmuring compliments to himself as men plunge into battle and die all around him.

Sigvald is a somewhat easy character to gloss over compared to the other Chaos Legendary Lords which are more powerful, provide more utility, or both. However, Sigvald does have his benefits. First, he is a remarkable duelist. Even better, he is a remarkable duelist with items that provide regeneration. The one obvious downside is that he lacks a mount, meaning that if he is winning a duel against a mounted enemy Lord, they can just run away from him. Sigvald is a good Lord to bring if you want a competent Lord that can fend for himself and is difficult to snipe. Enemy missiles and monsters will have a hard time singling him out as he is on foot. Given that many of the other Chaos Lords are vulnerable to sniping, Sigvald is a conservative response to that tactic.

From a campaign perspective, the +15 Leadership when fighting humans is nothing to scoff at, but the +15 armor for all characters makes them all a good bit more survivable in combat. The bonus to horde growth is pretty good, as that is one of the biggest things that will slow down your campaign. His bonuses to Marauders are mediocre, especially because you will want to phase them out for Chaos Warriors and Chosen as quickly as possible. Although the upkeep bonus does make the early game more manageable and recruit rank helps Marauders be slightly more combat effective than normal. The fact that he starts with some Chosen and an artillery piece makes his army quite powerful in the early game. 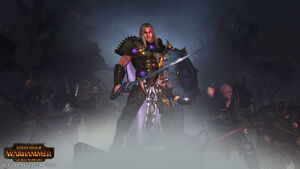