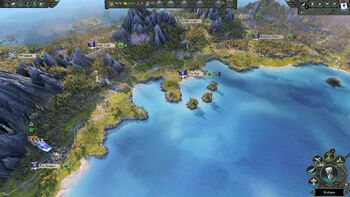 The province of Ellyrion, as seen in the Eye of the Vortex campaign. Note the 3 settlements, and forest/grassland terrain.

Provinces contain up to four settlements. Control of a province can be split between multiple factions, each ruling over the settlements/local regions they hold.

Provinces also have various kinds of terrain, some of which may be difficult for armies to cross, or even cause attrition.

Not to be confused with region (lore).

Each settlement in a province has its own region surrounding it. This means that in effect, each province is sub-divided into 1 or more regions. This is relevant for some items, followers etc that only affect the local region where the character is, or which say "all regions in province" meaning it affects the entire province regardless of who owns those regions. When players capture a settlement, they now own the region around it and it counts as their territory for the purposes of recruitment and other effects (eg: Great Incantation of Khsar).

To see the layout of provinces, consult the campaign map. Each different campaign has its own map and different provinces, see the article on campaigns for a list of campaigns.

Additionally, you can see the categories: