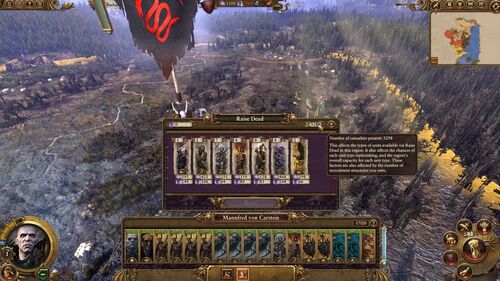 Mannfred Von Carstein about to raise the dead in campaign.

If you were looking for the spell of the same name, see Lore of Vampires.

This allows Vampire Counts and Vampire Coast to reinforce very quickly after a battle, especially when it is combined with normal recruiting/reinforcement.

Most of the time Raise Dead is limited to only a few basic units (eg: Zombies) per turn. However, if the player moves their army to the site of a major battle fought earlier in the campaign, the number of units they can Raise will be increased, and more elite units will be available (eg: Hexwraiths, Grave Guard, Vargheists).

battle site marker, which shows what turn the battle was fought, the number of casualties etc.

However, raised units will always start at Rank 0 and are not affected by lord skills or technology that gives recruited units starting XP/rank.

Insert detailed info regarding which units are available under what conditions.

Generally to get a minimum Raise Dead pool requires over 1,000 casualties.

This ability allows these factions to replenish their losses faster than any other. It also frequently encourages the merging and disbanding of weaker units to be replaced with fresh ones. Use this mechanic to maintain your momentum rather than waiting to replenish.

The Wargrove of Woe has a similar recruitment mechanic for its Wild Beast units.