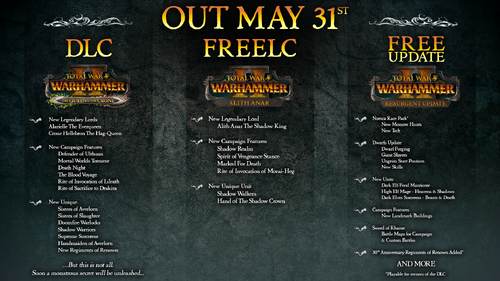 A promotional image for the resurgent update.

The Resurgent Update is a patch/update for Total War: Warhammer II which was released on 31st May 2018. The previous update was the MWNL 2018 update.

This update arrives alongside The Queen & The Crone Lords pack, bringing a huge array of content additions, revisions, and improvements to Total War: WARHAMMER II and the Mortal Empires campaign as well as many bug fixes and balance changes.

This update also brings the 30th anniversary Regiments of Renown from Total War: WARHAMMER, bolstering the forces of the Beastmen, Norsca, Bretonnia, Warriors of Chaos, and Wood Elves with 30 unique elite unit variants in the Mortal Empires campaign.

Finally, a host of extras have been added to switch up WARHAMMER II and Mortal Empires. These include: