Sarthorael the Everwatcher is a Warriors of Chaos legendary lord unit introduced in Total War: Warhammer. Spoken of for many ages, this powerful Lord of Change is favoured by Tzeentch himself, and fulfils his dark, malicious purpose.

Sarthorael the Everwatcher may also be considered a unique lord.

Although no Daemon's true name can ever be known, there has been talk for aeons of the one called 'Sarthorael'. Like all Lords of Change, the Ever-Watcher revels in his contriving and devious nature, hiding his true manipulative genius behind a screen of erratic and fickle behaviour. Yet Sarthorael is more than a mere Lord of Change - he is one of Tzeentch's favoured, sent to spread mayhem to those that the Great Changer deems deserving. Whilst the world of mortals should tremble when a Lord of Change appears before them, so too should Daemons be wary, for Tzeentch does not discriminate - all are fair targets in his game. And so Sarthorael is sent, watching and waiting, with all the craft and slyness of his master, to judge whether the end can really be brought about and, when the time is right, to see if those who stand upon the wastes really have the strength to do it.

Sarthorael appears in the Black Library novel 'Pawns of Chaos' by Brian Craig. In this story, Sarthorael is awakened as an unaware entity cocooned inside a human host. Eventually, it grows and takes its mantle as a Lord of Change before becoming a warp storm. Obviously a creature of great power, it is summoned to win a war by a wizard who does not truly understand the creature's motivations, and it subsequently abandons the fight to enact the will of Tzeentch upon a chaos tainted world. 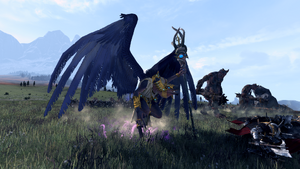