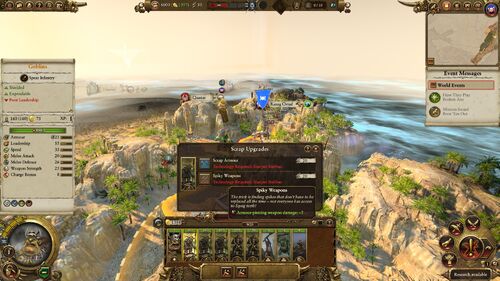 A player deciding on scrap upgrades. Click to expand

Scrap is a campaign mechanic for Greenskins factions.

It was added in The Total Waaagh! Update for Total War: Warhammer II in May 2020, as part of a large overhaul of the Greenskins. As such, it is not present in the first game.

How it works[edit | edit source]

Scrap is a special resource generated by Greenskins factions. The total amount of scrap your faction has is indicated in the top center of the screen on the campaign map.

This resource can be spent on units, to give them a Scrap Upgrade. Characters cannot get scrap upgrades.

Once a unit has been upgraded, it can't receive another upgrade, so choose wisely.

You can generate scrap by:

<-------If filling out this section, see Greenskins unit roster, but don't forget The Warden and the Paunch units. Maybe a table would be best?------>