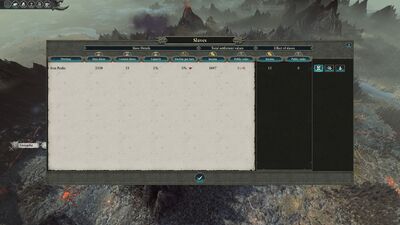 Slaves are a special resource/currency used by Dark Elves in the campaign. Slaves are gained by choosing the enslave post-battle option. Slaves are held in provinces, and provide

income, at the cost of

The total amount of Slaves across your entire faction is shown in the top center of the screen, when viewing the campaign map.

Slaves can be managed via the Slaves Screen, which is access via a button on the bottom right:

The following actions will gain slaves:

The slave decline rate determines how many slaves are lost in that province each turn to disease, mistreatment etc. A higher percentage means more slaves will die. Many things can affect this rate.

Slaves are also expended to pay for Dark Elves rites, which each cost between 100 and 500 slaves.

The Sacrifice to Khaine rite increases slave decline rate factionwide by +50% for 15 turns.

The Festivals of Hedonism commandment increases the slave decline rate by +100% (ie: it doubles the rate) in the province while it is active.

The Har Ganeth (Crone Hellebron) faction can launch a Death Night which consumes hundreds of slaves, in exchange for temporary faction-wide bonuses.

There is also a landmark building at Karond Kar in The Broken Lands for Dark Elves, which affects slaves:

Provinces with 4 local regions (ie: 4 settlements) will produce the most income from slaves, and can sustain more slaves for longer.

It should be noted that slave decline rate is based on current % of total capacity and scales up quickly... e.g. at 25% capacity one can expect a natural ~1% decline, but at 90% capacity experience a steady ~8% decline per turn, requiring huge amounts of new slaves each turn to keep up the numbers.

So, in general, slaves should be directed to 4-region provinces when possible.

Which 4-region province is the best?[edit | edit source]

Of the Dark Elf Territories some notable examples of prime 4-region provinces are:

Note: Don't be fooled by The Broken Lands. Although it has the Slave Traders' Palaces landmark, the fact that it is only a 3-region means it still produces less gold per slave than a basic 4-region province. Players should take The Broken Lands and build the landmark for the global effect, but avoid sending slaves there.

Whether one splits slaves evenly between certain provinces or stacks them all in one province will depend on how many slaves they are acquiring per turn, and the quality of their provinces.

Generally speaking, if you have two equally good 4-region provinces, you should split your slaves equally between them, to promote lower overall decline rate.

It is generally never a good idea to start splitting off slaves into a 3-region province, since the player generally will have access to a second 4-region province before filling up the first. When choosing between two 4-region provinces, the quality of the provincial bonuses to building income must be considered.

A good rule of thumb: Keep any provinces with substantial +% building income on "request additional slaves," any basic 4-region provinces on "receive slaves," (unless they were recently acquired) and every other province on "no more slaves." This will provide near-optimal allocation of slaves with little micromanagement.