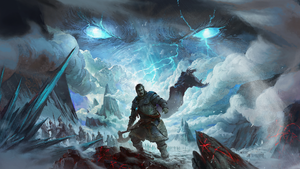 The Lost God, known as Prologue in the main menu, is the prologue campaign in Total War: Warhammer III. This campaign serves as a tutorial for new players, and has a story which is a prelude to The Realm of Chaos campaign.

Ursun, the Bear-God of Kislev, is silent. Without the Great Bear's benevolence, the Motherland freezes and its people suffer. Become the Kislevite prince sent north by the Ice Queen on the ultimate quest. The prologue to the Realm of Chaos campaign is a new Total War experience, perfect for brand-new players and those requiring a refresher course on the mechanics of the game.

Prince Yuri Barkov was sent to the North by Tsarina Katarin, but for all of his efforts, he nearly loses his army before Ursun himself speaks to him in the mountains. Persevering, Yuri linked up with isolated Kislevite settlements in the North, and saved Beacon from sacking by Marauders under Skollden the Wolf. In subsequent weeks, he tracked the Wolf of Dervingrad north, eventually slaying him at the town and reclaiming it for Kislev.

The Bear God then gave him a new mission: To penetrate deep into the Chaos Wastes and take the Howling Citadel. Yuri did not suspect that the trials he undertook would slowly, but surely corrupt him, exposing the prince to daemonic influences, and leading him to find Ursun - but not in the way that he anticipated. Yuri's decision would set in motion the events leading to The Realm of Chaos invading the Old World and exposing his precious Kislev to harm.

The Lost God features 15 provinces which all contain one settlement each.

Only Kislev Expedition is playable, led by Prince Yuri Barkov. This faction is not playable in any other campaigns.