This race requires the Rise of the Tomb Kings DLC to play.

The Tomb Kings are a race introduced in Total War: Warhammer II with the Rise of the Tomb Kings DLC. They have four playable factions, each led by a different Legendary Lord.

The Tomb Kings were previously a great human empire called Nehekhara (now known as the Land of the Dead), themed on ancient Egypt. However, Nehekhara was destroyed by the necromancer Nagash and his vampires, causing the mummified dead to rise. The Tomb Kings now seek to reclaim their lost glory, and take vengeance on Nagash and his kin. The armies of the Tomb Kings consist of ranks of skeleton soldiers and chariots, supported by towering animated statues of bone and stone.

A summary of Tomb Kings gameplay:

Across the arid deserts of Nehekhara, vast legions of skeletal warriors rise from beneath the baking sands to slaughter those who trespass into their domain. It is a lifeless realm of endless dunes, stained red from the blood of savages and barbarians. This is the Land of the Dead, where mummified kings are cursed to rule in perpetual unlife. But it was not always thus.

There was a time when the ancient kingdom of Nehekhara stood as a crown of human civilisation; a golden age when its cities shone with majestic splendour, its armies conquered entire nations and its kings ruled as gods among men. But this realm was razed millennia ago by the treacherous sorcery of the reviled Nagash: in a stroke, the living perished and the dead rose from their tombs.

Death is no barrier to glory for the Tomb Kings however. In unlife, they will see the empire of Nehekhara restored to greatness! 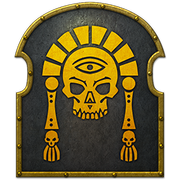 The armies of the Tomb Kings consist of ranks of skeleton soldiers, chariots, and animated statues of the Nehekharan gods, sphinxes, scorpions and other creatures. Unlike the Vampire Counts, another Undead race, the Tomb Kings do not rely on masses of expendable units. They instead supplement lines of skeleton infantry with heavily armoured, monstrous constructs such as the Ushabti and Necrosphinx. These constructs can be further enhanced with the support of the Necrotect Hero, who specializes in supporting units with the construct type. Also, unlike the Vampire Counts, Tomb Kings have access to archers and artillery.

Tomb Kings spellcasters have access to the Lore of Light, Lore of Death, Lore of Shadows and their unique Lore of Nehekhara. They also have a unique Curse ability which reduces enemy armour values.

Tomb Kings have several Regiments of Renown which are elite, unique versions of Tomb Kings units.

Legions of Legend are extra-powerful units, even more so than Regiments of Renown, which can be crafted at the Mortuary Cult.

As Tomb Kings units fall in battle, their essences flow to the realm of souls. As certain thresholds are reached, mass-healing and resurrection waves are triggered (map wide) reinvigorating the Tomb Kings’ armies. Furthermore, when the third threshold is reached, the Tomb Kings can summon a unit of Ushabti to the battle. This heals up to 672 hitpoints mapwide.

Tomb Kings units do not rout when their leadership goes down. Instead they stay in the fight, but take damage and lose models via crumbling. This is because Tomb Kings units are fearless undead, but the magic sustaining them can grow weak.

Like the Vampire Counts and the Vampire Coast, Tomb Kings are undead and so their units use different names for fatigue levels to reflect the lore. 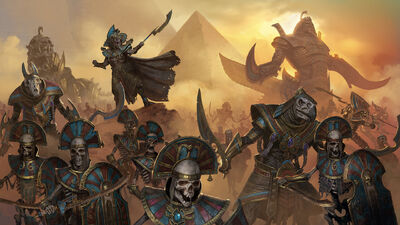 In the campaign, Tomb Kings are divided into four playable factions, each led by a different Legendary Lord:

The Epilogue for the Eye of the Vortex campaign when playing as Khemri, Court of Lybaras, or Exiles of Nehek reveals that Priest Nerutep is actually Thutep, the brother of Nagash. Thutep can also be recruited as a unique lord after researching his respective dynasty.

In the Eye of the Vortex campaign, Tomb Kings do not compete to control the Great Vortex and thus do not use rituals. Instead, they attempt to find the Books of Nagash which provide various bonuses and eventually culminate in a titanic battle at the Black Pyramid of Nagash.

Tomb Kings also compete to search for the books in other campaigns, though it is not part of the victory conditions.

Tomb Kings do not require money to recruit or upkeep units. Instead, they have a limit on how many units of a certain type they can per army. This cap is expanded by constructing more of the relevant military recruitment building in other cities. However, Tomb Kings still use money to construct buildings or enact rites. For instance each Open Graves building you construct increases the amount of Skeleton Archers you can recruit (faction-wide) by 4.

The following units do not have a limit:

Additionally, Tomb Kings have a cap on the amount of armies they can field. This is increased by researching technology (see below) and paying to increase the cap via the Mortuary Cult.

The Mortuary Cult are the keepers of the Lore of Nehekhara and the secrets of revivification, the Liche Priests of the Mortuary Cult can be called upon to construct unique and venerable items. Using a combination of trade resources and Canopic Jars, the player can order the construction of unique magic weapons, armour, talismans, plus enchanted and arcane items. For a cost, the Mortuary Cult can also resurrect powerful Legions of Legend for use in your armies.

Canopic Jars are a unique resource for the Tomb Kings. Ancient containers filled with arcane energy, Canopic Jars can be collected through missions, buildings, and as post-battle loot. They are used to awaken powerful units, unlock techs, perform rites and to craft unique items in the Mortuary Cult.

Tomb Kings can perform several rites to give them various powerful faction-wide bonuses. This is the only way they can recruit Ptra's Necrotect or the Casket of Souls. One rite gives them access to Tomb Swarm, an army ability which summons a swarm of scarabs to consume the enemy.

The Tomb Kings tech tree is divided into separate groups called Dynasties. Unlocking a dynasty will raise your army cap, allowing you to field additional armies. It also allows you to recruit a special unique lords such as Lahmizzash of the Fourth Dynasty. However each dynasty you unlock increases the time it takes to unlock the next dynasty. Thus players must carefully plan which dynasties they want to unlock in which order. At the end of the tech tree players can unlock powerful Tomb Herald followers.

Tomb Kings have some restrictions on diplomacy:

Ptra’s Necrotect has the ability to colonize ruins and start the settlement off at Level III.

The following are climate preferences for Tomb Kings (less Exiles of Nehek and Court of Lybaras):

See Random event and Dilemmas, then scroll down to Tomb Kings sections.

A few minor non-playable factions are grouped together in campaign under the Tomb Kings race:

During a Chaos Invasion, it is not known how AI Tomb Kings will act. Luckily it doesn't really matter because of how hard it is for the Chaos invasion to get to the Southlands.

How to play the Tomb King Campaign[edit | edit source]

How to play the Tomb King Lords & Heroes[edit | edit source]