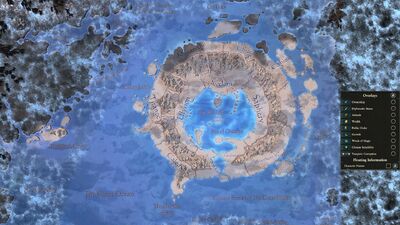 overheap map of Ulthuan as it appears in Eye of the Vortex.

Ulthuan is an island continent region in the middle of the Great Ocean. To the west lies Naggaroth, and to the east lies The Old World. Southwest is Lustria and southeast is The Southlands. Ulthuan is currently ruled by the High Elves, but in Warhammer lore it is also the ancestral homeland of the Dark Elves and Wood Elves. At the center of Ulthuan lies the Great Vortex.

In the lore, Ulthuan is a floating island, supported by the magic of the Great Vortex. In past cataclysms, large parts of the island (especially Tiranoc and Nagarythe) did in fact sink.

Ulthuan was introduced in Total War: Warhammer II, where it appears in Eye of the Vortex and Mortal Empires. It is a circle shape, with an inner sea inside. The circle is broken at the bottom by the Straits of Lothern, allowing ships to pass through from the Great Ocean into the inner sea. A central mountain range called the Annuli Mountains runs through the center of the land. This mountain range divides the continent into the sheltered Inner Kingdoms (Eataine, Ellyrion, Avelorn, Saphery) and more rugged Outer Kingdoms (Caledor, Chrace, Yvresse, Cothique, Nagarythe). There is many special buildings in the settlements of Ulthuan.

There are four passages through the mountains on the western and northern sides, which are guarded by the Fortress Gates. Meanwhile the great port of Lothern guards the Straits of Lothern. This makes Ulthuan a difficult continent to conquer.

Ulthuan's climate is mostly temperate island, with some wasteland.

The terrain is mostly forest, grassland, coast and mountains.

A Blood Voyage of will automatically attack Ulthuan once launched.

Eye of the Vortex[edit | edit source] 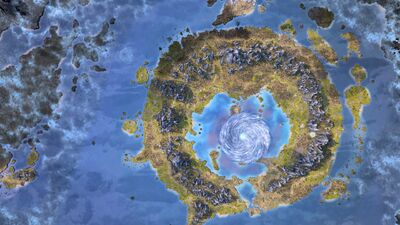 Terrain in Eye of the Vortex.

Other High Elf factions such as Nagarythe, Order of Loremasters, Tor Elasor, Fortress of Dawn, Citadel of Dusk and the rogue army Tor Elithis Refugees are found outside of Ulthuan proper.