Wood Elves require Realm of the Wood Elves to play.

The Wood Elves are a playable race introduced in Total War: Warhammer. It was added as part of Realm of the Wood Elves DLC.

Wood Elves are playable in campaign, multiplayer and custom battles. They have 4 legendary lords, Orion, Durthu, Sisters of Twilight and Drycha.

The Wood Elves are a mysterious race of fickle elves and their forest-spirit allies, who dwell in the magical forest of Athel Loren. Their military features elite elven units who tend to be only lightly armoured, along with forest spirits such as Dryads and some monsters. Their archers are some of the best in the game.

Heralds of Ariel and

A summary of Wood Elves gameplay:

Tall, slender humanoids who live within the ancient forest of Athel Loren, the Wood Elves are a mysterious race who rarely emerge unless coming to its defence. Although sometimes appearing cruel, in reality they are a neutral power who act only to maintain the balance of their environment. Elves are not just long-limbed, they also live for thousands of years, which naturally makes other races seem trivial and irrelevant; only the preservation of their forest home matters, everything else – the affairs of mere ’mayflies’ – is of little importance or consequence to them.

Although incursions are driven back, there are constant threats to the Wood Elves’ forest home and way of life. In order to combat Athel Loren’s many foes, they have developed elite warriors and can call on the forest itself in its defence. In addition to this martial strength, beneath the forest floor lie the Worldroots, enabling subterranean travel; Elven armies – led by their perennial King in the Woods, Orion – emerging to surprise and defeat those who encroach upon Athel Loren’s glades and boughs uninvited…

Missile-focused Elven unit roster with a variety of enchanted arrows and fast-moving cavalry, including stag mounts and flying missile cavalry. Contrasted with tanky forest spirits who can absorb damage, but cannot deal a ton. Wood Elves units tend to be lightly armoured, even compared to High Elves or Dark Elves. Amber is required to summon forest spirit units such as Dryads and Treemen, which tend to be much tougher. However like other Elven races, they rely on elite troops - quality over quantity.

Wood Elves spellcasters have access to the Lore of Life, Lore of Beasts and Lore of Shadows.

As of The Total Waaagh! Update, all Wood Elves units have the Woodsman (Attribute) which allows them pass through trees and be unhindered by that terrain type.

No artillery or war machine units. 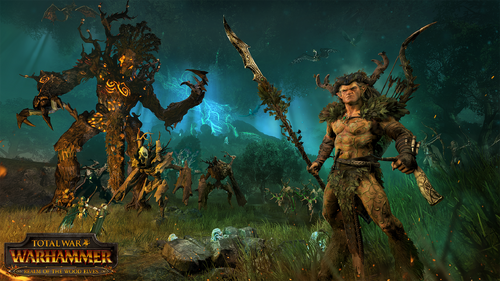 Orion and Durthu, flanked by Tree Kin, Wild Riders and Glade Guard. Hawk Riders and a Forest Dragon can be seen above.

The Wood Elves are a non-horde race who occupy settlements and control provinces, however they use a special colonization system different to all other races.

In campaign there are four playable Wood Elf factions, each with its own starting position, and led by separate Legendary Lords. See individual pages for faction-specific info.

Wood Elves players can recruit the following Legendary Heroes when playing a campaign or in custom games. See the individual lord pages for information on their various bonuses in campaign.

The Wood Elves use a totally different settlement system to other races, and are unaffected by regional occupation or climate. Instead, they build Forest Settlements inside the wood of Athel Loren. These have access to the full range of Wood Elf buildings and many building slots. Outside of this, they can only construct Asrai Lookouts which are very limited in building choice but are necessary to acquire Amber.

The Oak of Ages[edit | edit source]

The Oak of Ages is a special settlement which the player starts in control of, for both the main Wood Elves faction or Argwylon. It provides faction-wide bonuses as it is upgraded, which requires Amber. To win the campaign it is necessary to fully upgrade the Oak, and if the Oak is destroyed the player will lose the campaign.

Amber is a powerful resource that improves the Oak of Ages and the forces of Athel Loren. Amber is obtained through capturing territories or forming diplomatic agreements (usually alliances) with other factions. Amber is required to meet the campaign's Wonder victory conditions. Lacking enough Amber causes various economic problems. This was changed in Total War: Warhammer II, please see page for details.

The Elven Council is a unique campaign mechanic for Talsyn, similar to the Fleet Offices for the Vampire Coast factions. Players can assign lords to various positions on the council, conferring different bonuses. Argwylon has their own Forest Council mechanic instead. Both factions can appoint the leader of the other to their council if they confederate the other faction-thus Durthu can be on the Elven Council and Orion on the Forest Council. Most of the offices can be opened by building a special building in each of the provinces of Athel Loren (1 per province).

Worldroots are a magical, ancient network of roots from the Oak of Ages, extending across the world. Elven armies can enter the Use Worldroots stance to use the Worldroots. This is done to avoid impassable terrain and enemy forces. While in this stance they can ambush or be intercepted, resulting in a Worldroots battle on a special battle map.

The Wild Hunt is a unique event for Talsyn, and is not available for other Wood Elves.

In Total War: Warhammer II, Wood Elves can heal magical forests to win the campaign. They do so by conquering adjacent regions and fighting battles against intruding armies.

Which buildings are available differ depending on the type of settlement, as per the Wood Elves settlement system.

Wood Elves post-battle options for captives are as follows:

Wood Elves have these settlement options when they have captured a settlement:

Originally did not have any, but they were added in the Foundation Update.

The Wood Elves have all climates available to them as Suitable, but have a unique settlement system.

The Wood Elves have no commandments.

Victory conditions for the Wood Elves in the campaign:

Wood Elves are incredibly delicate, and reliant on ranged damage to take out most of their enemies. As a result, you'll need to keep yourself moving away from the enemy, and avoid being surrounded. Fast races, such as Bretonnia, or armored races, such as Dwarfs, will be significantly more difficult to handle as a result. Focusing fire on threats (Such as cavalry or enemy ranged units) can mitigate this somewhat.

When facing Wood Elves, Vanguard Deployment and Cavalry can take away their advantage very quickly.

On the campaign map, many minor factions are grouped together as Wood Elves. These all have a diplomatic positive racial bias towards each other, and use units from the Wood Elves unit roster.

Eye of the Vortex: