World Walkers is a playable subfaction of Norsca introduced in Total War: Warhammer. It is led by Wulfrik the Wanderer and can be found in Norsca, north of The Old World.

Norsca is an icy mountainous peninsula in the far north, under the shadow of Chaos. Its inhabitants (the hardy and warlike Norscan Tribes) are Chaos-worshippers, and they share their inhospitable land with ferocious monsters. When the Norscans raid and plunder other lands, it is with hordes of barbarian warriors backed up by trolls, mammoths, fimir, skin-wolves and even mighty frost-drakes.

A summary of World Walkers gameplay:

The harsh and brutal nature of the far north is reflected in the grim character of its peoples. Yet even more than the privations of their cold and barren lands, their proximity to the Realm of Chaos shapes the Norsca and other northern tribes. Rather than fight the darkness, they embrace it, worshipping the forces of Chaos as Gods, providing a willing army for the Ruinous Powers' never-ending war against order and reason.

Though physically tougher and more powerful than those living an easier life in the south, the Northmen are still Men - although many of them will have their humanity warped by mutations, and their savagery and barbarism are legendary. War is their natural state, and whether raiding across the Sea of Claws in their longships or feuding with neighbouring tribes, their blades never go long without blood. They follow the Ruinous Powers with unquestioning fervour, personifying them as the Hound, the Crow, the Serpent and the Eagle. They need no priests to intercede with their Gods, believing the slaughter and terror they bring is an act of worship in itself, though they are also highly superstitious and often raise twisted shrines and make blood offerings to honour whichever deity they hope to win favour with. The shared ambition of every northern warrior is to cause the greatest possible bloodshed and mayhem in order to appease and please their Gods; in seeking this goal most die violent deaths, or fall into warped insanity, but a few become favoured as Champions of the Gods, often 'blessed' with mutations such as a melding of flesh and armour, or weapons fused with the hands that wield them.

No single Lord holds sway over the nomadic northern tribes, although men and monster alike are increasingly drawn to fight for King Throgg, a Troll of surprising intellect, or to follow Wulfrik the Wanderer, a Norscan warrior cursed by the Gods to forever seek out and fight the mightiest opponents. And whenever the Ruinous Powers prepare for a new assault on the south the Northmen put aside their petty disputes and rivalries and unite behind their Champions, ready to fight and die in the name of their Gods. At times like this, the Realm of Chaos itself swells and expands, bleeding over into mortal lands. One day, the Norsca believe, their advance will not be checked, and Chaos will swallow the world.

Cheaper, undisciplined marauder infantry and cavalry units, backed up by many large monstrous units. Few ranged options, though Marauder Hunters (Javelins) are quite good against monstrous units. Mammoth units are a great asset, and have siege attacker. No less than 7 monstrous infantry units including characters.

Norscan spellcasters have access to the Lore of Death, Lore of Fire, Lore of Metal and Lore of Shadows.

2 Regiments of Renown are rewards for monster hunts (see below), while 1 is a reward for gaining max allegiance with the Hound (again, see below).

The other 6 were added in the Foundation Update. 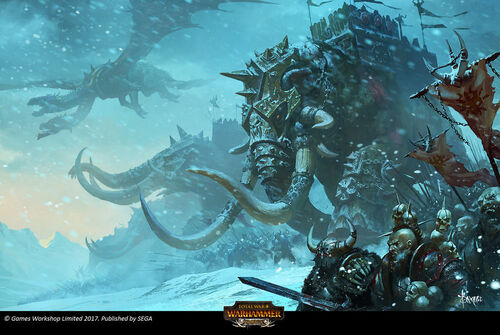 World Walkers is a non-horde faction that occupies settlements and controls provinces, however they use a special colonization system different to other races.

World Walkers players can choose from the following lords when starting a campaign.

World Walkers (and Wintertooth) use a different settlement system to other races, and are unaffected by regional occupation. They can only occupy settlements in the Norscan peninsula, coastal settlements, and racial capitals.

The Monstrous Arcanum is an ancient book which contains monster hunt quests. These quests are unlocked via the Norscan technology tree, and have various powerful rewards such as unique items and Regiments of Renown.

In May 2018, four more monster hunts were added to the Monstrous Arcanum for Mortal Empires in Total War: Warhammer II.

Allegiance to the Gods[edit | edit source]

Main article: Allegiance to the Gods.

Allegiance to the Gods allows Norscan armies to take various actions to honour either the Serpent, the Crow, the Eagle or the Hound. This will fill up a bar for the corresponding god, and when the bar is totally full a bonus will be given - for instance filling the Eagle's bar will give the player a Lord of Change called Azrik the Maze Keeper, while filling the Crow's bar will create a plague to affect your enemies.

This mechanic changed between TWW1 and TWW2.

When the player kills another Norscan Tribes faction's leader (not just any lord, but the faction leader who appears on the diplomacy screen) in battle, then that faction will become extremely likely to agree to confederate with the player's faction. Additionally, after taking a Norscan faction's last settlement, the player has the option to subjugate them.

When the player kills another Norscan Tribes faction's leader (not just any lord, but the faction leader who appears on the diplomacy screen) in battle, then a dilemma will appear called Warlord Defeated. This gives the option to release the enemy leader, kill them permanently, or confederate their faction.

If you defeat Throgg then you will get Throgg Defeated. This dilemma only gives the option to confederate or release the lord (which gives -20 relations with their faction).

The Everchosen's Summons is a special dilemma for Norsca and Wintertooth that occurs when the Chaos Invasion starts. It allows them to either ally with Archaon and his Warriors of Chaos in their invasion, or forge your own route and destroy the Warriors of Chaos.

Limited technology tree. Some options must be research in order to unlock quests in the Monstrous Arcanum. Powerful technologies unlock after occupying other races' racial capitals.

Climate preferences for World Walkers (note they are still affected by the Norsca settlements restrictions):

World Walkers/Wintertooth post-battle options for captives are as follows:

World Walkers does not have any commandments, since they cannot control entire provinces except in the Norscan peninsula itself.