"[...] He and his men observed the temple-city to be totally uninhabited as they entered, getting all the way into the central plaza before being set upon by a swarm of twelve foot tall reptilian monsters with daggers for teeth."

- Recollections of the demise of a Bretonnian army in Xlanhuapec[1]

Xlanhuapec is a minor Lizardmen faction introduced in Total War: Warhammer II. It is led by Uaxti and can be found in the heart of Lustria, often being under attack by the Vampire Coast.

Capturing the city of Xlanhuapec, which the faction is named after, is an optional objective of Markus Wulfhart's campaign in order to avenge a Bretonnian army who had recently been slaughtered there.

Xlanhuapec, the City of Mist is the second city to be founded and a mysterious place that holds many secrets left behind by the Old Ones. For its own protection, the entire city is perpetually wreathed in banks of coiling mist and it is possible to pass within a few yards of its boundary stones without noting the city’s sprawling presence, so thick are those swirling vapours. Xlanhuapec houses a number of ancient artifacts, including the Placid Pool - reflective waters that allow world-spanning visions; the Device of the Great Beyond - a communications relic through which others from far distant stars occasionally speak, and an Eternity Ship — a great egg-shaped vessel within which time does not flow. These hoarded treasures and more are jealously guarded and it is a death sentence for any outsider to so much as glimpse the city beneath its protective shroud of mists, for Xlanhuapec is sacred ground to the Lizardmen.[2] 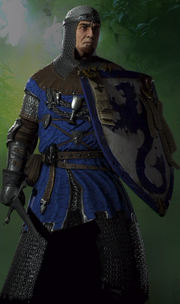 Rodrik L'Anguille, the only known survivor of the Slaughter of Xlanhuapec.

Some time around the coronation of Karl Franz, a Bretonnian army arrived in Lustria and set their sights on Xlanhuapec, hoping to plunder the great city's riches. While inside the city, however, a large Lizardmen force attacked the Bretonnians from all sides, resulting in a slaughter. Only one man is known to have escaped the carnage, Rodrik L'Anguille. He is later found by Markus Wulfhart's men and requests help with avenging the fallen by capturing the City of Mist.[3]